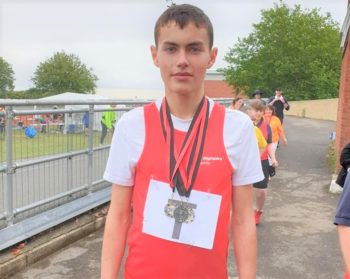 Luke has been a member of Inspire since December 2017. He continues to come to Inspire because he has lots of fun and it’s good exercise. He likes seeing the other members as well as all the coaches.

Luke enjoys lots of sports including tennis, athletics, badminton, hockey and cricket but tennis is his favourite; he’s been playing since he was about five years old.

Luke’s biggest challenge in sport was during the relay at a Special Olympics athletics event. The team had practised with a baton but on the day there were no batons available which caused a lot of confusion. Luckily, the team was given an opportunity to run again.

Luke has performed well at all the athletic events he’s competed in but his greatest achievement was in Portsmouth this July when he won three silver medals for Long Jump, 200m and 4x100m relay.

Luke studies at college four days a week and works in a charity shop once a week. He also relishes going to charity shops as a customer, seeking out bargains such as DVDs, CDs and clothes. He is a fan of computer games, especially Mario Smash Bros at which he remains unbeaten! Luke is a James Bond expert. He owns all the films and has memorised many facts about them. He also likes going to the cinema to see the many Marvel superhero films when they come out.

Luke is a very healthy eater, enjoying plenty of fruit and vegetables. His favourite meal is a Sunday roast, closely followed by salmon and new potatoes. He very rarely eats sweets although he does allow himself the occasional Twix!

Luke doesn’t really watch television, preferring to watch films or music videos on YouTube instead. His favourite bands are The Smiths, The Beatles and The Cure. He has a good musical ear and has had piano, drumming and ukulele lessons in the past.

Luke plans to be in education for a few more years but, after that, he thinks he might enjoy working with animals.