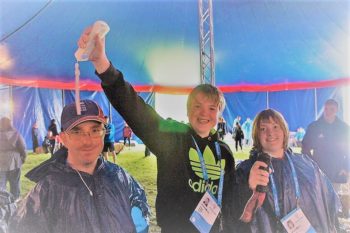 Owen has been a member of INSPIRE for 10 years and he is our longest member.

He continues to come to INSPIRE because it’s fun and it improves his fitness and there are some great people to talk to. Owen likes football, rugby and athletics and sees himself as a good team player as he is always encouraging his team.

His big challenge is trying to keep going when he gets tired. His greatest achievement was when he represented South East of England in the Special Olympics National Games in Sheffield. He achieved a personal best in long jump of 2.4m and he enjoyed the atmosphere and especially all his family being there to watch him.

Owen like to do lots of other things as well like relaxing watching Hollyoaks, EastEnders, Riverdale. He also likes playing computer games Robiox and loves going to the cinema and was thrilled when he got a limitless ticket for his 18th birthday present this year.

Owen is a student at Kingston College and is learning about work skills which include maths, literacy and work experience. This year he is playing a lead roll in the musical Grace and will perform it in June. Owen loves acting and doesn’t feel nervous about performing in front of an audience.

Owen has two brothers, one sister, one dog, one daygu and two chinchilas. In his spare time, he likes to go out with friends to Kingston and go to the gym at the bottom of his garden. When he leaves college, he thinks he might like to have a job involved in sports as he has had so much fun learning, competing and performing all different sports.